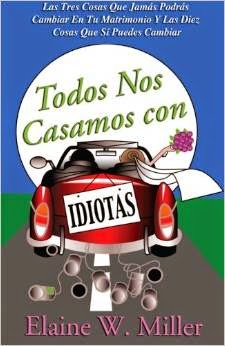 How does an author have their book translated into another language? I have no idea, but God placed We All Married Idiots into the hands and heart of an International Worker in Uruguay who envisioned this book as a tool to help Spanish marriages worldwide.

ELAINE: Stephanie, I think we've known each other about 30 years. Our husbands were pastors together in upstate New York. We've both covered a lot of territory in 30 years. Tell our readers a little about yourself.

STEPHANIE: I remember those days of home service when we were pastoring in upstate New York right after I graduated from college.  We were only married a year when we began our ministry there…in a few months we will celebrate 31 years of marriage!  While in New York our son was born, and when he was just a little over a year old we moved from snowy New York to balmy Costa Rica to begin language study.  After a year of tackling the Spanish language we moved to Quito, Ecuador where we worked on a church planting team for 3 years, and where our daughter was born.  We then spent the next 20 years in the coastal city of Guayaquil, nicknamed the “Pearl of the Pacific.”  We ministered in two different church plants, raised our children, taught at the Bible Seminary and built relationships that will last a lifetime…and then some!  I realized that when we left Ecuador, I had spent half of my life there!  Then God in His great sense of humor nudged us out of what had become comfortable and homey to take on a new challenge in the most secular country, and most secular city in Latin America.  Our desire is to reflect the true God through transparent lives and to show God’s love in practical ways…to live generously and love extravagantly.

ELAINE: Stephanie, I remember well when We All Married Idiots was released. You must have been one of the first to purchase it on your Kindle, because within a few days I received a message from you asking if We All Married Idiots could be translated into Spanish.  I cried. I really did. Tell me, what inspired you to ask about a Spanish translation?

STEPHANIE: Throughout the years our ministry has always involved couples…pre-marital counseling, marriage counseling, couple’s dinners, marriage enrichment weekends and just hanging out with couples around a meal.  We have also made a promise to each other to make our marriage a priority.  It is a commitment that we take seriously and God takes it seriously as well.  Your book is very practical, down-to-earth and peppered with personal illustrations that make someone think… “I am not the only one that has thought or done this…so maybe there is hope for me.” Uruguay has an 80% divorce rate and I thought that this would be a great book to get into the hands of my friends here, and for Spanish speakers all over the world.

ELAINE: What a response I received from around the world when people read that We All Married Idiots was being translated into Spanish. I heard from people in Spain, El Salvador, Bolivia, Argentina, Florida. I understand that not all Spanish is alike. The Spanish spoken in the United States is a bit different than the Spanish spoken in Uruguay. Is that right? If so, can all Spanish-speaking people understand this translation, or just the Spanish in Uruguay?

STEPHANIE: Spanish has many variations, with a few changes in vocabulary and accents, just like in the United States with the accents from the north and south, east and west. English spoken in Canada has different words for some things and their accent is different as well, the same for England, Australia and other English speaking countries.  But it is still English, and it can be understood in the rest of the world.  The same is true for Spanish.  There are many Spanish speaking countries with their own peculiar accent and terminology, but in the end it is still Spanish.  Most of the Spanish speakers in the United States have their roots on other countries in Central and South America.

ELAINE: Marriage problems are universal. Is there anything about Todos Nos Casamos con Idiotas (We All Married Idiots) that makes it different than other Spanish books on marriage?

STEPHANIE: Todos Nos Casamos con Idiotas is a practical book, not just theoretical, that presents real-life problems and real-life solutions. People can identify with the book. I like the fact that each chapter has the Meditate (not just Elaine’s great ideas…but God’s word), Reflect (what does this mean to me), Change (what am I/we going to do about it) and Pray (realizing that we need God’s help or this is never going to work) elements that make it seem “do-able.”

ELAINE: I can't imagine trying to take each sentence of a book and translate it. Did you have help or did you take on this project alone?

STEPHANIE: I translated the book by myself and also enlisted the help of 2 of my best friends from Ecuador and one friend from here in Uruguay to be my editors.  They are all Christians and bi-lingual, hence I asked for their help to make sure that the book was translated correctly, that the concepts made sense, and that it just wasn’t a literal word-for-word translation. As I translated each chapter I would send it to 2 of my editors, they would send me their corrections, I would compile them and send that document to the third editor.  After the book was complete I sent the final version to a fourth person who is also a bi-lingual newly married Christian for her opinion…she loved it!

ELAINE: Now that Todos Nos Casamos con Idiotas  is available, what are your hopes for Idiotas and how can it be used in the lives of Uruguayans as well as Floridians?

STEPHANIE: My desire is that Todos Nos Casamos con Idiotas will be used to bring hope and healing to broken marriages.  I pray that this book will speak to couples that have been married 6 months or 60 years.  May it be an instrument to help couples cross the finish line, to run the marathon, and not just give up after a 50 yard dash.  My hope is that couples will make their marriages a priority and this will positively affect all of society.

ELAINE: I assume you felt We All Married Idiots  was a book worth reading or you would not have asked to translate it. What about this book touched your heart and why would you recommend couples read it?

STEPHANIE: I would recommend We All Married Idiots because it is biblical, practical and useful.  I have probably read the book at least 6 times by now, and each time I read it I am reminded of something else that I can do to improve my marriage.

ELAINE: Thank you, Stephanie, you have blessed me and your work will bless marriages. I know we both agree, to God be the glory!

We All Married Idiots is available on line at http://www.amazon.com/We-All-Married-Idiots-Marriage/dp/0984765522/,  www.ChristianBook.com, Barnes & Noble,  through your local bookstore, or this website.

May God bring serenity to your marriage,

Email ThisBlogThis!Share to TwitterShare to FacebookShare to Pinterest
Labels: Divorce Prevention, Marriage helps, Spanish books on marriage, Spanish translation of We All Married Idiots, Translating your book into another language