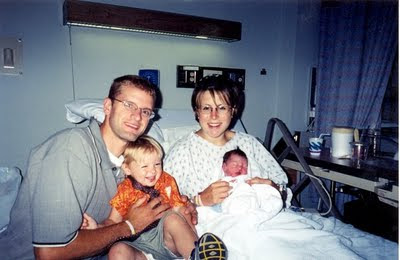 AT his birth we didn't know if Garrett would survive. Today he is ten! Born with facial and other deformities that doctors didn't understand and could not fix, Garrett's birth has been an adventure we would not have missed. Why? Because Garrett is a treasure that touched our world.

This big 10 year old has taught me more about Jesus, than any other human.
The love in his heart exceeds any other heart I have ever known.
Thank You, God, for this extraordinary gift named Garrett.

I wrote about the day of his birth in, Splashes of Serenity: Bathtime Reflections for Drained Moms.

"What was God doing the day He knit Garrett in his mother's womb? Was He so busy solving other problems that he missed a few stitches? How easy for God to correct such a simple mistake. Perhaps God was preoccupied putting extra stitches in Garrett's beautiful heart....

My grandson was born with a cleft lip and palate. (Later, we learned of other medical concerns.) Everyone was surprised. The ultrasound did not show it; the doctors and nurses even missed it at Garrett's delivery. His mother was the first to notice as she attempted to nurse her son. Her hungry boy could not suck. As she gazed at her precious child, she was assured that God knit him perfectly in her womb. God did not say, 'Oops! I missed a stitch.'"

You can see the peace in Elizabeth's and Joe's faces as they hold their new-born gift. How? Why? Because they knew without a doubt that God was not surprised. God knit Garrett perfectly the way God wanted Garrett knit. He didn't say, "Oops! I missed a stitch."

May the truth that God never says "Oops!" be a splash of serenity to you today.