The Night I Fell in Love with Dan Miller

Planning our 50th wedding anniversary, my mind floods with memories and joy. God's purpose for us was so much more than we dreamed or expected fifty years ago. With thanks to God for His Goodness to us all the days of our lives, I share the moments when God's plan was sealed. God must chuckle as He orchestrates the love story in each of our lives. 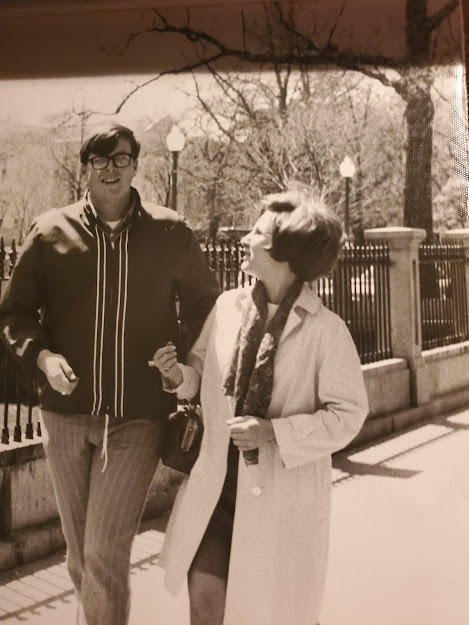 Dan was a blind date that didn't go very well. I never stopped talking. He never stopped listening, but he didn't say too much. (I learned later that this is a good quality.) At the time, I figured his silence was an indication of his disappointment in the girl he envisioned when he asked to see me before he had even seen me. (Of course,  in 1970 facebook and internet and cell phones did not exist.) A blind date really was a blind date.
To my surprise, he asked to see me again. To my greater surprise, I said, "Alright." Date number two was a little worse than date number one.  I pre-decided not to do all the talking, so we pretty much didn't talk. He was a gentleman, I'll give him that credit. He made no attempt to hold my hand or kiss me goodnight. I wondered, Was he a gentleman, or did the thought of touching my hand repulse him? I did not know. We parted after two dates with no invitation for a third and my intent to refuse another encounter if asked.
The phone call came on Tuesday, "Would you like to go out to dinner and to Ford Theatre to see The Fantasticks?"
Please understand. I was a young, single girl working at the Treasury Department in Washington, D.C. My paychecks came in, and my paychecks went out, mostly for new clothes. Food was not a budget item. So, if a young man asked me out to dinner, I grabbed the opportunity to eat. Plus, theatre was in the deal. Win! Win!
Ninety degrees in April in D.C. is unusual, but that was the weather. Dressed for a special evening, Dan picked me up after work. He wore a wool sports coat and looked quite fine. We dined in an elegant restaurant. Now, I hadn't eaten for two days due to my money mismanagement. I ordered several large items. Dan's eyes were big and his expression unbelief. This night while I was busy eating, Dan did all the talking and his words were kind, funny, and pleasant.
"Are you ready to go to the play?" He said after our lengthy meal.
"I haven't had dessert!"
I'm assuming that's the moment he fell in love with me. I learned later that Dan really likes a girl who can eat! He denies it, but I remember him joking one day and telling someone he married me because I was the only girl who could eat more than him!
We ordered dessert and enjoyed sweet food and conversation.
In 1970 Ford Theatre had not been renovated. The seats were the same as the night President Lincoln was assassinated — small and close together. Ninety degrees outside meant even higher temperatures inside this non-air-conditioned theatre. The heat hit my wool-coat-clad date hard. Drops of sweat beaded on his forehead and proceeded down his face for the rest of the night.
When we arrived at our reserved seats, our hearts sunk a bit. One seat had a perfect view of the stage. The other seat had a large round column from ceiling to floor directly in front. Without hesitation, Dan moved into the obstructed seat. For the rest of the evening, his legs straddled the column, as his perspiration-soaked head swerved to the right and to the left attempting to catch a glimpse of the play.
Not one word of complaint came from Dan's mouth. In fact, he never even mentioned our seats were bad, or his face was hot, or his date ate too much. His purpose that night was to assure me a lovely evening. Mission complete. He stole my heart, as my mind filled with the thoughts of, this is a quality guy. That thought was sealed when he left me at my door with no kiss or expressed desire to come into my apartment.
Five weeks later we were engaged. Five months later we wed. Dan lived Philippians 2:3-4 then and he hasn't faltered in fifty years of making my desires more important than his own. When a wife returns that affection, you've got a win-win marriage!

"Don't be selfish; don't try to impress others.

Be humble, thinking of others as better than yourselves.

Don't look out only for your own interests,

but take an interest in others too."

I often say I married Dan because he was the kindest person I've ever met. I said it then. I say it now. With thanksgiving and praise to God who brought two idiots together in love for a lifetime.

Email ThisBlogThis!Share to TwitterShare to FacebookShare to Pinterest
Labels: Elaine and Dan Miller 50th anniversary, Marriage helps, What to look for in the person you marry