In her powerful book Mentoring for All Seasons,
Janet Thompson writes of the value of mentoring through all seasons of life,
including the marriage season.
I was thrilled to learn Janet recommends my book
We All Married Idiots as a resource for mentoring marriages.
If you desire your life and marriage to grow into the likeness of Christ,
give Mentoring for All Seasons a read.
Thank you Janet Thompson for writing life-changing books
and agreeing to share words straight from your heart. 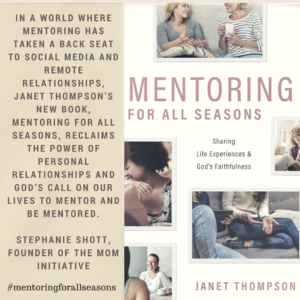 Learn from Janet Thompson's wisdom as a mentor and a mentee:

"That is why a man leaves his father and mother and is united to his wife, and they become one flesh.—Genesis 2:24

As women, we’re continually coming out of one life season and going into the next. You may have experienced the blessing of having a mentor in the changing seasons of your life, or long for a mentor. Those with experience in a season can reach out and offer counsel, support, prayer, and God’s wisdom. Mentoring is that easy.

Some women have had the blessing of the same mentor from newlywed years to seasoned married years, and others have found mentors for specific phases of the marriage season.

Maybe you looked at this heading and thought: Needs are different for newlyweds than couples married twenty-five or fifty years. True. The specific details will differ, but the basic truths keeping a marriage on solid ground remain the same regardless of years together.

The marriage season covers a wide spectrum, but the principles of mentoring remain the same because God’s Word regarding marriage, communication, finances, family . . . never changes . . . and God’s Word is the foundation for every mentoring relationship, which is always two way.

I once heard a mentor say her mentee was a newlywed, and since she herself had been married twenty-five years, she expected to be sharing tips about married life with her mentee. But with a wink, she said the mentee taught her a few things about putting a “kick” back into her own marriage!

Marriage is between two imperfect people, who will always disappoint and disillusion each other unless they keep perfect Jesus at the center of their relationship. That might sound like a bold statement, and certainly many Christian marriages fail, probably because they didn’t keep Jesus at the center of every decision, discussion, and disagreement.

Many issues subject a couple to divisive onslaughts attacking a marriage: finances, parenting, jealousy, in-laws, personalities, loneliness, illness, outside attractions, work . . . daily life. Statistics of crumbling marriages—even among Christians—indicate Satan is winning the spiritual battle in many homes because couples haven’t armed themselves with the only effective offensive weapon—the sword of the Spirit—the Word of God.

How many marriages might elude divorce if spouses had mentors praying for and with them, teaching them how to study their Bibles daily, and showing them how to put God back on the throne in their marriage and family?

Mentoring for All Seasons

In Mentoring for All Seasons: Sharing Life Experiences and God’s Faithfulness, sixty-five women share their mentor or mentee testimonies, along with my own personal experiences, helpful tips for mentors and mentees will guide women in how to connect and nurture each other in mentoring relationships, as a mentor or a mentee from tweens to twilight years. There are Scriptures for each season to help guide the discussion to God’s Word.

Mentoring for all Seasons is a reference, application, and coaching tool for a mentor or mentee traversing life’s journey together as Titus 2:3-5 instructs us to do.

3 Likewise, teach the older women to be reverent in the way they live, not to be slanderers or addicted to much wine, but to teach what is good. 4 Then they can urge the younger women to love their husbands and children, 5 to be self-controlled and pure, to be busy at home, to be kind, and to be subject to their husbands, so that no one will malign the word of God.

Mentors don’t have all the answers, but God does!

Excerpts from Mentoring for All Seasons used with permission of Leafwood Publishers.

Janet Thompson is an international speaker, freelance editor, and award-winning author of nineteen books including her latest, Mentoring for All Seasons: Sharing Life Experiences and God’s Faithfulness, available at all Christian bookstores, online book stores, Amazon, and signed by Janet at her website store, where you can see more of her books.

She is also the founder of Woman to Woman Mentoring and About His Work Ministries. Janet and her husband Dave relocated their empty nest from Southern California to the rural mountains of Idaho, where Janet writes and they love watching the deer frolic in their yard.

Thanks for being my guest blogger, Janet.
Mentoring and being mentored both bring splashes of serenity to our souls!
Enjoy your mentoring journey and buy Janet's book!

Email ThisBlogThis!Share to TwitterShare to FacebookShare to Pinterest
Labels: Growing up in Christ, Janet Thompson, Marriage, mentoring, Mentoring for All Seasons, Mentoring young couples, We All Married Idiots