Rejected—my manuscript slipped back into the file to be read another day—over my dead body, literally.

Too many gifted writers give up too soon because they fear rejection. They write, are rejected, and then give up. Words that could change someone's life and sentences that God wants someone to read—are stuffed in a drawer never to see or be the light.

You don't write a book so that no one will every read it. If you want to be published I urge you to accept rejection, keep polishing your manuscript, and keep submitting to publishers.

Writing books and writing conferences will help you along your way. A book you should read and keep as a reference is Dave Fessenden's, From Concept to Contract. 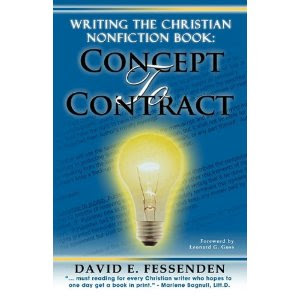 Last week, I was honored to be the guest blogger on Dave Fessenden's blog, http://www.fromconcepttocontract.com I wrote the following about that dreaded "R" word—Rejection:

It's a fact, as a writer, you will be rejected—not everyone will like your writing. Why? Well, because readers are all different. A writing style that entices one publisher will not appeal to another.

It happened to me. In 30 minutes I had two appointments with two different publishers. One read my work, put the paper down, and said she couldn't read it. That was not my hoped-for response. Fifteen minutes later a different publisher read the same words and said "This is great! I'd love to publish it."

Rejection is a part of the writing life. Please realize you are not alone. Perhaps these facts from Chicken Soup for the Writer's Soul will encourage you:

Dr. Seuss' book, And to Think That I Saw It on Mulberry Street, was rejected by 27 publishers before Vanguard Press accepted it. It sold six million copies.

Pearl Buck's The Good Earth was rejected 14 times and went on to win a Pulitzer Prize.

Mary Higgins Clark was rejected 40 times before selling her first story. More than 30 million copies of her books are in print.

John Grisham's first novel, A Time to Kill, was turned down by 15 publishers and 30 agents. More than 60 million of his books are in print.

Star Wars was rejected by every movie studio in Hollywood before 20th Century Fox finally produced it.

Rudyard Kipling received the following rejection from the San Francisco Examiner: "I'm sorry, Mr. Kipling, but you just don't know how to use the English language."

What lesson can a writer learn from this? Don't give up. Keep writing. Keep learning. Keep submitting your work.

It's sad when the work of a gifted writer goes unpublished because they can't handle the rejection. Keep your eyes fixed on the One Who received the ultimate rejection. Jesus died for you. I hope you write for Him.

Today I blogged about the rejection. Tomorrow I'll share how my first book went from being a concept to being a contract. Woo Hoo!!!

May God bless your writing with Splashes of Serenity!

Elaine
Posted by Elaine W. Miller at 7:58 AM

Email ThisBlogThis!Share to TwitterShare to FacebookShare to Pinterest
Labels: A Writer's Life, An organized Christmas, Book writing, From Concept to Contract, Getting Published, Rejection