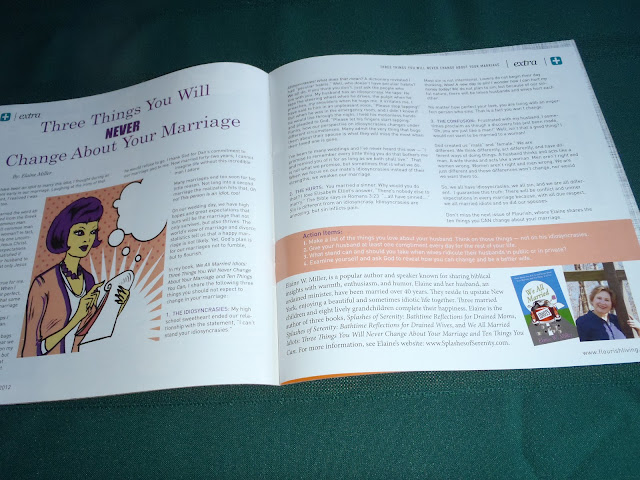 Women suffer from low self-esteem. I believe secular magazines and media do much to decrease a woman's good feelings about herself. That was not God's plan. He planned for women to flourish! Introducing a new magazine that builds you up to be the woman God intended —Flourish Magazine.

I was blessed when Myra Houser, the editor of Flourish magazine heard one of my interviews and WOW asked if I would write an article for her magazine, Flourish. I'm pleased to be featured in the November/December 2012 issue.

Then, I heard the January/February 2013 issue was "The Love and Sex Issue" so I asked Myra if I could write another article. She agreed.

I'd love for all of you to subscribe to Flourish so you can enjoy this beautiful new magazine aimed at encouraging women to flourish. When you subscribe, you receive two issues. One for yourself and one to share with a friend. Cool!

In the words of flourish:

"At Flourish we exist to be an instrument used for transformation, and to offer life-changing principles for women. Our desire is to provide a clear path to guide today's women to flourish personaly, and to influence others to do the same. Women are a powerful influence in the world. It is important that we learn how to live our lives to the fullest, moving from mundane to magnificent, through a life following Christ."

Flourish needs financial help to continue. Myra asked that I ask you to:


Check out our Kickstarter funding campaign and support us in continuing to help women flourish in 2013. Great year-end tax deduction. Awesome Christmas gift that keeps on giving. Subscribe by Dec 5 to receive Jan's "The Love and Sex Issue" one of our most critical issues to date. Check us out!
http://www.kickstarter.com/projects/1436934979/flourish-magazine-print-and-web-2013?ref=email

Flourish Magazine Print and Web 2013
www.kickstarter.com
We believe EVERY woman was designed to flourish and we are an instrument used to make that happen!

Flourish has just launched a Kickstarter funding campaign. We are in need of securing funding for 2013's print costs and work on our website, currently our weakest link. Would you be willing to share the link on your facebook, twitter, or with friends for them to check out? At year end, we are a great way to receive tax credit as well. Kickstarter is an all-or-nothing type of funding. If we do not receive 100% of our goal for the project, we receive nothing. So it is crucial for us to get the word out.

If you would be willing, the url for the site is:

Flourish has already been a splash of serenity in my life and I know will be in your life too!